A world expert in galaxy classification and the measurement of cosmic distances, he made several estimates of the size and age of the Universe

He was hired as a professor at Ohio State University the same year he graduated, and he stayed there until 1958 when he accepted a professorship at the David Dunlap Observatory of the University of Toronto in Ontario. He became involved in expanding the observatory’s facilities, perfecting computerized calculation techniques, and developing the field of polychrome photometry. For the latter, he collaborated with Robert D. McClure to design a photometric system that would go on to be used around the world for photometric studies.

His work on the classification and evolution of galaxies, as well as on the extragalactic distance scale, led him to make several estimates of the size and age of the Universe. He thus became a world expert in the field of matter.

Van den Bergh began his interest in comets in 1973 and discovered a new comet in 1974 that bears his name. In 1986, he was able to obtain remarkable images of the jets emanating from Halley’s comet.

In 1977, he was named Director of the Dominion Astrophysical Observatory in Victoria, British Columbia, and he occupied the post starting in 1978. Four years later, he became President and Chairman of the Board of the Canada-France-Hawaii Telescope Corporation. He retired in 1986, but retained a researcher position at the Dominion Astrophysical Observatory in Victoria.

Today, van den Bergh focuses his research on the classification and the evolution of galaxies using images taken with the Hubble Space Telescope. He retains an interest in a number of diverse subjects: among others, he published an article in 1992 that refuted the idea of an astronomical significance for the Nazca lines of Peru, and one in 1994 demonstrating that it is unlikely supernova explosions caused mass extinctions on Earth. 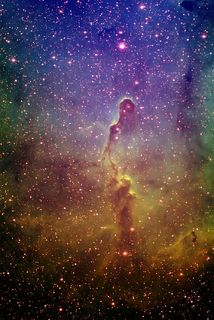 Van den Bergh has published more than 500 scientific articles. He received numerous awards for his work and was named an Officer of the Order of Canada. Asteroid 4230 bears his name in his honour.