Stars Were an Integral Part of Their Lives

Before the arrival of Europeans, the Amerindians of Canada saw the starry sky as a place full of characters and stories. Many of the peoples believed that everything found in nature was a living entity, even celestial objects like the Moon, the Sun and the stars.

In the Amerindian belief system, the Earth is flat and the celestial objects revolve around it. The planets in the solar system are not thought of as planets, but rather as large stars that are simply brighter than the rest. The Sun and other stars are seen as lights that move across a solid celestial canopy. For the majority of Amerindian societies, each star is a spirit – a powerful and sacred being.

The North Star, which always remains in the same position in the sky, was well known to North America Amerindians, and they would often rely on its constant alignment with the North Pole to help them navigate during their travels. The Iroquois even oriented their long houses according to the four cardinal directions so that the Sun would shine onto the entrance at dawn, and set in the direction of the exit.

The Amerindians grouped many of the stars into constellations, and most of these are associated with stories that serve as a lesson to youngsters. Some of the constellations, like Pleiades or the Great Bear, were also used to mark the seasons. This is the case for one of the Mi’kmaq legends of New Brunswick and Nova Scotia.

One spring day, Mother Bear woke up after hibernating through the winter. Being very hungry, she immediately began to look for food. Chickadee, who was also very hungry, decided to hunt Mother Bear. Too little to hunt on his own, he got six of his friends to help.

After hunting all spring and all summer, the slowest and heaviest hunters beginning with the two owls flew lower and lower until they eventually lost the trail of Mother Bear. Blue Jay and Pigeon were the next to abandon the chase.

By mid-autumn, Chickadee, Robin and Grey Jay caught up to Mother Bear who, having no other option, turned to fight. Robin shot an arrow that wounded Mother Bear; he then jumped on her and killed her. Completely covered in blood, he shook himself near the trees of the forest, colouring them red. That is why, since then, the leaves of the trees turn a vivid red colour in autumn. As much as he tried, Robin was never able to remove all the blood that stained his chest, and he still wears his red marks today. 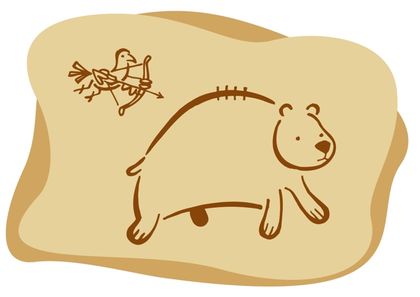 The three friends ate Mother Bear and left her skeleton there. During the winter, the spirit of Mother Bear left the sky and came to rest within another sleeping bear. The bear awoke the next spring and Chickadee and his friends hunted her too until they killed her in autumn. The story has repeated itself every year since then.

This legend reveals how the change in position of the Great Bear constellation in the sky serves to mark the beginning of autumn. The Amerindian societies in Canada used a lunar calendar of 10 months with 30 days in each month. We know that the year began in autumn for the Amerindians of eastern Quebec, but it is not clear how they determined the precise start to their year because they do not appear to have had any knowledge of the equinoxes and solstices prior to the arrival of the Europeans.

The North Star, which remains in a fixed position in the sky, was well known to Amerindian peoples. The following legend describes its origin according to the Blackfoot of Alberta: 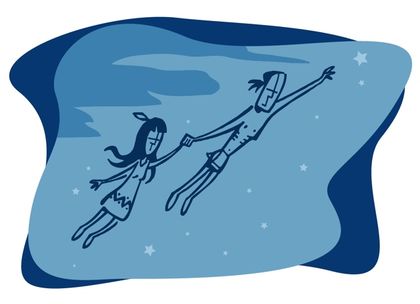 Two sisters sleeping outside woke before dawn and looked up at the sky. One of them pointed towards the Morning Star (Venus) and said, “That star is so beautiful, I will take it as a husband.”

Several days later, the same young woman came across a handsome stranger in the forest while she was carrying wood. He was observing her, so she asked him, “What do you want from me?”

The young man replied, “I am Morning Star. You wanted me as your husband, so here I am.” He placed a feather in her hair and asked her to close her eyes. He flew her up to the sky, into Sky Country.

Moon and Sun, the parents of Morning Star, joyfully welcomed the young woman. Moon even gave her a gift of a small spade used to uplift roots. “You may use this tool to harvest vegetables in our garden, but you must never touch the sacred turnip. If you do, it will bring misfortune.”

Time passed by and the woman gave birth to a baby. One day, she was outside with her child and decided to unearth the sacred turnip. To her surprise, she found that she could see her tribe and old home through the hole left by the turnip.

When Morning Star found out what she had done, he told her: “Now you must return to your own kind and bring our child with you. Be careful, for he must not touch the ground for 14 days or he will return to me and become a star.”

Unfortunately, what should not have happened did, and the child was forced to return to the Sky Country. But as he tried to pass through the hole left by the sacred turnip, the child became stuck. And that is why, to this day, there is a star that does not move across the sky.

In some cases, the same celestial constellation is the subject of legends in more than one Amerindian society. For example, two tribes in Canada have stories about the constellation Pleiades. This one is from the Iroquois of Ontario.

Many years ago, an Iroquois tribe began the trek toward their winter hunting grounds near a large lake in southeastern Canada. Upon their arrival, tribe members hurried to set up camp and tackle their chores.

Eight children, tired of helping their parents, would gather together each day away from the tribe to dance for several hours. One day, an old man appeared. He was covered from head to toe with a coat of shiny white feathers and said to them, “If you do not stop, misfortune will come your way.”

The children did not listen and continued to take longer and longer breaks during which they never stopped dancing. Day after day, the old man came to warn them until one evening, the children suddenly found themselves rising up into the air. The children were scared at first, but began to enjoy the feeling and continued to dance. They soon realized, however, that if they stopped, they would fall back to the ground.

The old man shook his head and thought, “If only they would have listened to me.” Not long after, the people of the village saw the children floating high in the sky. One of the children recognized his Father’s voice and stopped dancing, but quickly fell like a shooting star to the ground. Ever since then, the other seven children have never stopped dancing in the sky.

The second legend about Pleiades comes from the Assiniboins of Saskatchewan:

Seven brothers living alone in the Northern Plains passed their time looking for their parents. Always on the move, they were looking for food and a new shelter to sleep in. Tired of such a miserable life, the youngest among them, who was playing with a spider’s web, said, “Why not transform ourselves into something else? We would be happier.”

“That’s a good idea, but into what should we transform ourselves?” asked the others.

One of them had an idea. “Why not change into rocks?” he asked. “Don’t be stupid,” another replied. “Rocks can be broken.”

“What about trees? Trees don’t break – they bend with the wind,” said one of the brothers. “Even the greatest trees can be uprooted by wind and storms,” argued another.

The discussion continued through the afternoon, but no answer was found. Finally, nighttime fell over the brothers. 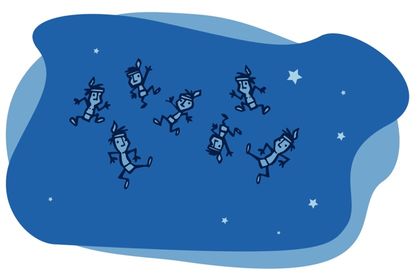 “Why not take on the form of Night? Night is never destroyed!” exclaimed one of the brothers. “Night is scared of light, and runs away when Day arrives,” replied another.

“Then why not change into stars?” asked the wisest of the brothers. “They live in the sky and never die.”

The seven brothers thought that was the best idea. The youngest helped each of his brothers climb into the sky using the spider’s web. He put three of them to his left, and three to his right. He then took his place in the middle, and there they remain to this day.